The Coming Supply Shock in Mining

No country is immune to the spread of COVID-19.

The virus has killed over 95,000 people and infected over 1.6 million people in 209 countries globally.

The virus has put many major mining operations at risk.

Mines are being shut down across the world, either by government mandate or by the company due to the virus.

The knock-on effects of the mine shutdowns will be significant.

For example, in Namibia, mining contributes to 25% of the country’s income and the whole industry has been put on hold.

Despite mining being an essential service in many regions…

This has had a significant impact on many companies that are not well capitalized to weather the storm.

The virus has put a company like First Quantum in a serious predicament.

First Quantum has current total liabilities of over $11 billion while it has a market cap of $5 billion. First Quantum’s largest operating mine, Cerro Panama, has been put on care and maintenance this week because of the virus.

I visited this project in 2007, back then its name was Cerro Petaquila. After spending 3 days at the site and going through all the drill core and data, I wrote in my report to subscribers an alert that the project would be a producing mine within a dozen years.

I organized a Private Placement for my subscribers in early 2007 that returned a 50% gain in 4 months that I personally was the lead order. We took a Katusa Free Ride on the company 4 months after our initial recommendation and it worked out well for us in the end. It’s a good mine that the virus took down.

I don’t know how First Quantum gets out of this predicament with their debt obligations, but this brings me to a bigger point.

Real World: Bringing Back a Mine Isn’t Like Turning the Lights Back On

You can’t just flick a switch.

The mining world has never seen such a rapid shut down.

A good example of rapid mining shutdowns is the Yugoslavian mine shutdowns in the early 1990’s.

Trajan, one of my personal favourite Roman Emperors also understood the importance of Balkan mines to the Roman Empire during his reign from 98AD to 117AD.

The reason I am sharing the Yugoslavian mine shutdowns of the early 1990’s is because the mine managers expected the mines to be reopened quite quickly (they were shut down due to the civil war).

Back in the 1990’s, The Yugoslav army was the 6th largest military in the world and expected a quick defeat of the rebel Croats. The Yugoslavs lost and most of the mines remained shut down.

In the early 2000’s I went on my own quest to buy these past producing mines within the Trepca complex.

So, in 2004, with a rental car full of geologists I hired (fluent in Serbian Cyrillic), paying out of own pocket, we travelled across Serbia, Kosovo, Croatia and Bosnia. We visited mines and smelters that were operating in the 1990’s that never came back online.

I literally walked through dozens of mills, mine head offices and mines that looked like everyone left on a Friday afternoon and never came back for a decade.

Most of the mills we visited were rusted out and all but one came back online.

After one mine visit, and after going through the historical drill data and production numbers, I asked the former mine “газда” (boss) why the mine never came back online?

He shared with me that they tried many times, but they just couldn’t make it work for various of reasons.

I just want to remind everyone; it’s not guaranteed every one of the publicly and privately owned mines (that I list below) will come back online.

Again, I’m just sharing the Yugoslav mining experience, and maybe all the mines will come back online without a hiccup.

I just don’t think that will be the case.

It’s very rare that mines, when they are built, come online without hiccups (production delays and cost overruns).

At a minimum expect the same for bringing back the mines that have been shut down.

Either way, many of the shutdown mines will face financing hardships and will be at the mercy of their bankers. Much like First Quantum, which is run by some of the best mining guys in the world.

How Many Mines are Shut Down?

The chart below shows the number of mines that have been impacted on a daily basis over the last 30 days. The data includes public and privately owned and operated mines.

We overlaid that data with the number of Covid-19 infections globally during the same time. This is to show you visually the infection rate globally compared to mine shutdowns. 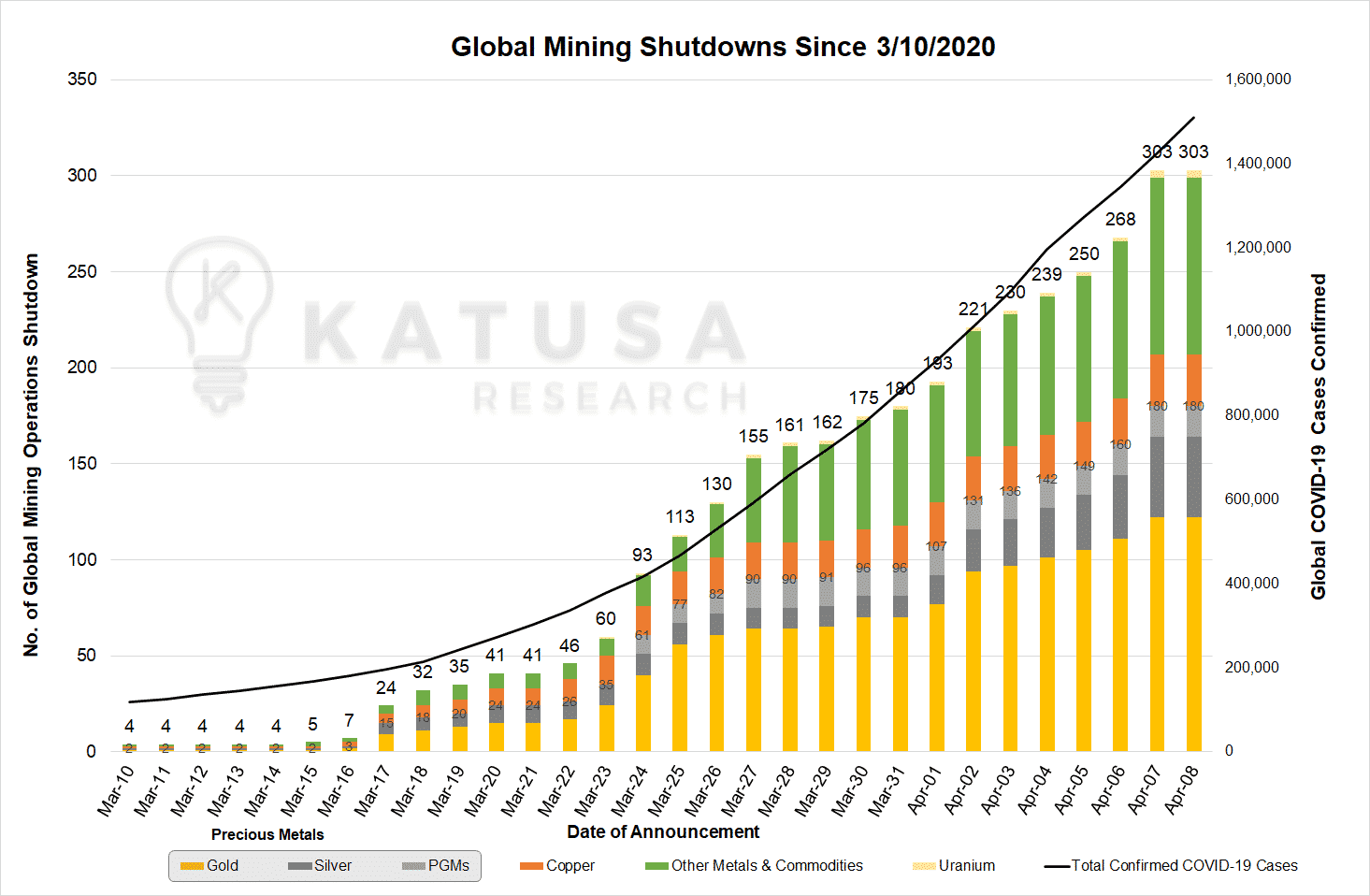 Will There be More Mine Shutdowns?

No new mine shutdowns were announced over the last two days (April 8th & 9th) —however, I do expect more shutdowns.

I do want to mention that we have contacts that have messaged us stating a major underground gold mine has employees who contracted the virus and the company has not announced the infection nor shut down the mine yet. I expect this will be announced shortly but is NOT in our data above because the information is not been confirmed by the owner.

I also emphasize that there will be hiccups in many of the mines listed above in trying to bring the metal back online.

Precious metals mines were the hardest hit and that is because of the nature of the operations. For obvious reasons, underground mines were harder hit than open pit operations.

The number of confirmed COVID-19 cases across the globe has surpassed the 1.5 million mark.

Some countries have been ahead of the curve trying to flatten the curve while others have lagged behind.

And this is especially important in resource reliant producing countries.

Two countries that we are keeping a close eye on are Australia and Kazakhstan.

Will the Land Down Under… Go Under?

Most of the world has gone into their bunkers, quarantining down and stocking up on staples to ride out the storm.

However, Australia has not been taking the coronavirus seriously – until very recently.

For some of the Aussies have been business as usual…

This was the scene on March 20th. Only a few days later did officials shut down the beach – as people were not maintaining social distancing. This behaviour may see the virus spread into the Australian mining operations.

Coronavirus Impacts on the Uranium Market

The uranium market is controlled by a handful of players.

In North America, Cameco shut down its underground Canadian Cigar Lake Uranium project for 1 month because it is a remote fly-in fly out operation. Social distancing can’t be maintained. That shutdown takes 13% of the global uranium production off the table.

In Namibia, production has been shut down for 3 weeks including its uranium projects, that takes another 10% off global production offline.

To the uranium market, Kazakhstan is like Saudi Arabia, Russia and all of OPEC to the oil market.

The Kazakh state-run operation Kazatomprom is the world’s largest, lowest cost uranium miner in the world.

Recently, Kazakhstan shut down its biggest cities and declared a national emergency.

Visas for foreigners have been pulled and they have shut down most essential businesses, except for its uranium mines.

They have been over 780 cases reported to date with 8 deaths and Kazak officials hope that it will peak at 3,500 over the next few months.

Many of the state-owned uranium sites are in remote regions. Workers live in close quarters. It is in everyone’s best interest that no one gets sick.

All eyes in the uranium world are on Kazakhstan.

Do Mine Shutdowns Lead to a Price Shock?

In normal times, a decrease in supply leads to higher commodity prices.

However, these are not normal times. The reason is, there has been an equal if not larger reduction in the global demand for commodities.

Take the oil market for example…

Current oil production is soon to be 103 million barrels per day. In April, with most of the world’s major economies shutdown, demand is set to crater by over 15%. The same can be said for other industrial commodities like copper, zinc and iron ore.

So, the answer to that question is, it depends.

Those who are well capitalized can survive the downturn. But those with large debts denominated in US dollars will struggle mightily.