Opening Up and Breaking It Down: Here’s What Matters in Biden’s $2T Infrastructure Plan

Wow, today’s headlines were all over the map.

CNBC ran headlines that literally said that the March jobs report was going to be great, followed by a line saying jobless claims were higher than expected.

Which is it? It’s definitely not both.

Meanwhile, the genius journalists at Bloomberg remain stuck on the blowup at Archegos Capital… still!

Then for the coup de grace later on, Business Insider ran another Suez Canal headline — four days after the ship was refloated — to let readers know the meme fest Gen Z put on during the “crisis” was a motivating factor for the refloat crews.

As per usual, these news stories are just gimmicks meant to harvest your attention.

Pay them no mind… After all, we covered them already.

Instead, I’m quite happy to redirect all that mental energy to things that are actually important.

The game begins in the spring, when everything else begins again…

—A. Bartlett Giamatti, “The Green Fields of the Mind”

If you’ve been reading along for the past year, you know I’m a huge baseball nerd.

And for good reason — I used to look like this in college.

As per usual, I’ve got my subscription to MLB.TV ready to go and some Nathan’s Famous hot dogs — the official wiener of MLB — ready to grill up.

I’ve also got some Miller Lite getting cold in the fridge in the hopes that Major League Baseball will one day switch their official beer — which is sadly still boring old Budweiser.

But while this particular opening is important to me personally, the opening up of the broader economy is of interest to all of us.

Google announced just yesterday that employees will begin to return to the offices in a limited capacity this month.

And if they want to work remotely for more than 14 days per year, then a formal application will be necessary.

Google is also encouraging — but not mandating — its employees to get vaccinated, as most states are opening up eligibility requirements.

I was able to get mine yesterday and I’m already looking at flights to New Orleans… See you soon, Big Easy.

But I digress… There are two big takeaways there.

First — people will start going back to the office en masse very soon, which is beneficial for our +17% position (so far) in Design Brands, Inc. (NYSE: DBI), owner of giant dress shoe retailer DSW.

And secondly, it means people will begin to travel again, which is beneficial for our position in Spirit Airlines Inc. (NYSE: SAVE).

TSA throughput volumes continue to increase steadily (chart below) and if Google’s action is any indication, air travel is going to accelerate rapidly.

SAVE is down a little since we wrote about it, so picking up another tranche here is not a bad idea.

By far the biggest and most important news yesterday, however, was the surprise announcement of President Joe Biden’s Infrastructure proposal, dubbed The American Jobs Plan.

The biggest surprise to this analyst was that there really wasn’t very much infrastructure in it. 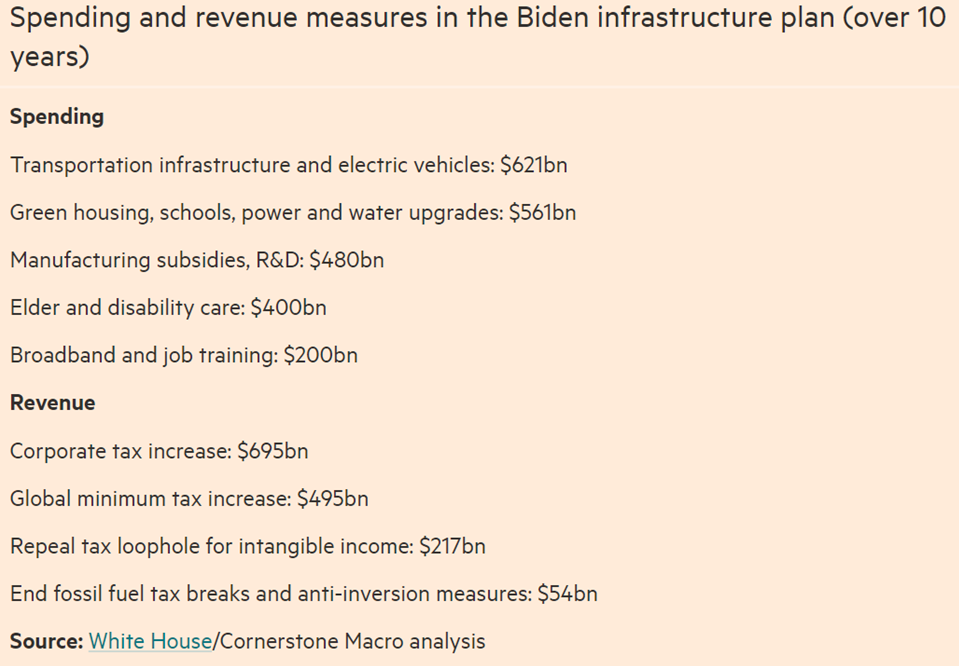 I have no ideological problem with manufacturing subsidies, R&D, or broadband/job training — they’re at least tangential or necessary for the underlying work we need to do.

I don’t even have a problem with raising corporate taxes — it’s ridiculous that some of the most profitable companies domiciled on our shores are somehow able to skirt them in the first place.

But $400 billion for elder care… in an infrastructure bill?!?

As it turns out, just $621 billion of the $2 trillion — barely one-fourth — is dedicated to shoring up roads, bridges, ports and airports.

And bizarrely, even a big chunk of that funding is dedicated to building 500,000 EV charging stations — a staggering number considering we only have 136,400 gas stations and that the average U.S. consumer can’t even afford electric vehicles at this time.

It also begs the question… “Where will all that power come from?” After all, I’ve written before of the need to modernize our power grid.

One would presume that would get sourced from the $561 billion earmarked for “Green housing, schools, power and water upgrades.”

But when I scratched just beneath the surface, what I found was just $100 billion — barely 0.5% of the overall bill — dedicated to the grid itself.

The remainder? $140 billion in tax credits for clean energy generation and plugging orphaned oil and gas wells, $213 billion to make homes more energy-efficient and $100 billion to do the same for public schools.

A month and a half after the renewable power generation system literally broke in one of our largest states, somehow the authors of this plan didn’t find it wise to fix the grid FIRST.

And considering most Americans are of the correct opinion that we run the risk of facing a critical energy shortage in the next five years, failing to sufficiently address energy’s delivery system is a stunning oversight.

Moreover, “energy efficiency” rarely achieves its stated goals of reducing energy consumption. This is because of what’s called the “rebound effect,” or the tendency of humans to push efficient technologies harder, thereby offsetting a portion of efficiency gains.

So, while energy efficiency is not a bad thing in and of itself, it wouldn’t provide anywhere near as much security as fully rebuilding the grid itself.

Plus, it’s expensive, which is worrying Americans — especially those who continue to struggle finding work.

And dedicating such a large chunk of funding in that direction is deeply misguided in this professional’s opinion.

From an investing standpoint, clearly electric vehicle manufacturers — like our own EV play Porsche Automobile Holdings SE (OTC: POAHY) — are the biggest winners in the bill’s current form.

But Republicans are already lined up against the infrastructure and jobs plan — which may come back to haunt them come midterms — and there might not even be enough real infrastructure in here to satisfy moderate Democrats.

As such, we’re likely to get some changes over the coming weeks.

To the extent those changes will be directed at building some actual “stuff,” I want to put the Global X U.S. Infrastructure Development ETF (NYSEArca: PAVE) on your radar.

As you can see from the chart, it has done nothing but grind higher over the past year at relatively low volatility. Because it is so heavy on materials — and materials are sensitive to inflation — I think it’s likely to continue in this direction for the next three months.

The strategy here is to pick up small increments (even smaller than the ¼ tranche steps we usually recommend) on any flat-to-down days.

Because if any materials-related changes are made to this bill as it evolves, the holdings in this ETF (some of which are listed below) are all going to rip at once.

And as you can see, some have even ripped already.

Unfortunately, we’ll have to wait and see if our nation’s politicians can actually manage to “play ball” and get this one thing right.

At least I have some baseball to watch in the meantime.

Welcome to the Slowdown: Moves to Make Ahead of Stagflation

How to Profit From Carbonomics